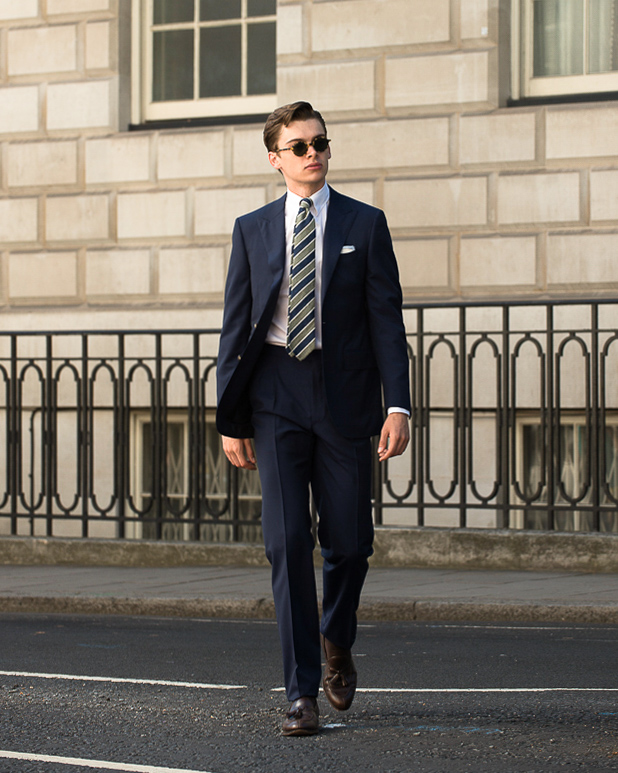 A few months back, I shared the experience of measuring up my Canali Su Misura (Made-to-Measure) suit, via appointment at the London menswear shop – Richard Gelding part of baltzar.com.  I was delighted to receive a message 4 weeks later telling me that my suit had made it over from Italy and landed in London. 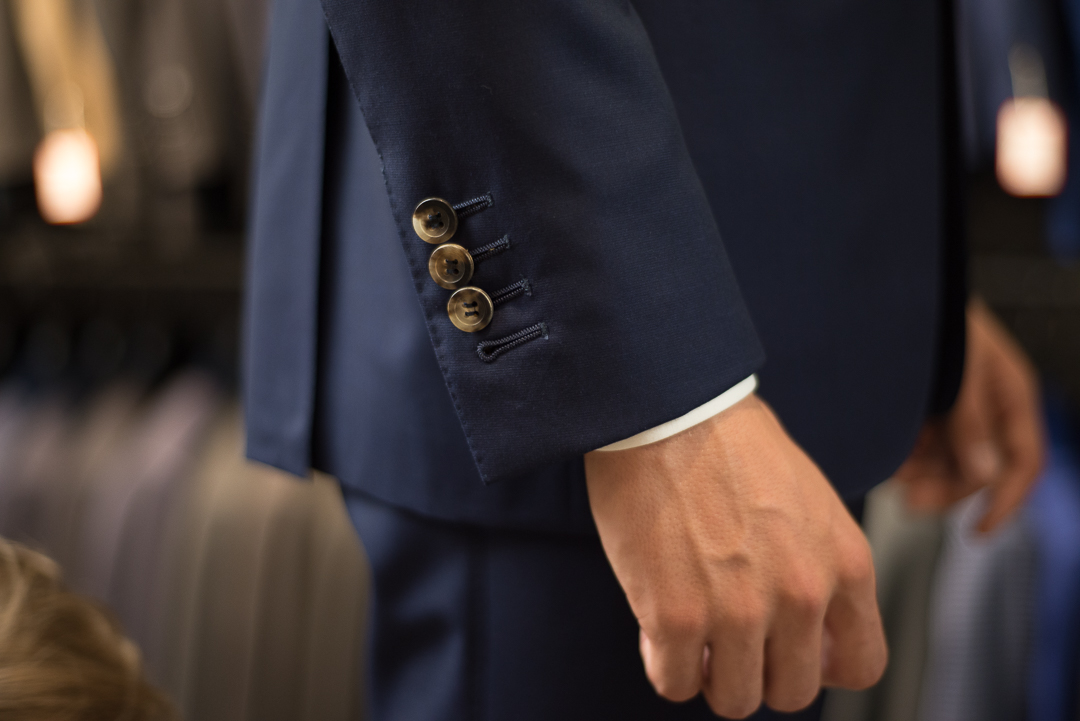 I returned to the store for a final fitting, excited to see the result of the various changes and choices done when ordering.  I was instantly pleased to see the soft textures and deep blue colour of the beautiful fabric. I had already seen the fabric on the sample, but when it unfolds in front of you as a full suit it always becomes more true to its colour and slightly lighter than on a small sample piece. Something which had been pointed out and highlighted to me during the process of choosing.

Next up was trying on the suit. By now having had several pieces made, by routine I scanned the suit for potential need of finishing touches. I was happy to conclude that the seam of the structured shoulder fit perfectly on the edge of my shoulder bone, the sleeve length was sublime and it had a very nice v-shape on my waist. Looking at the trousers; the waist fitted nicely on my hips and the drape was just impeccable, potentially I am going to let out the waist just a fraction, something which always has to be considered a possibility due to the nature of a waist circumference. The trousers came unfinished, meaning that the length would be adjusted and altered by Richard Gelding’s in-house tailor. Due to how the rest of the trousers is fitting the final length may vary slightly, since we did quite a lot of changes in the waist, seat and leg area, it is the safer option to finish the trousers when everything else is in place; also I am quite particular about the length and tend to have slightly different length depending on the characteristics off the trousers.

Another important detail on the trousers are the double reverse pleats, these folds of fabric adds flexibility to the front of the trousers as it allows to expand slightly when sitting down, as well as  an aesthetically pleasing effect of drape to the trouser legs. 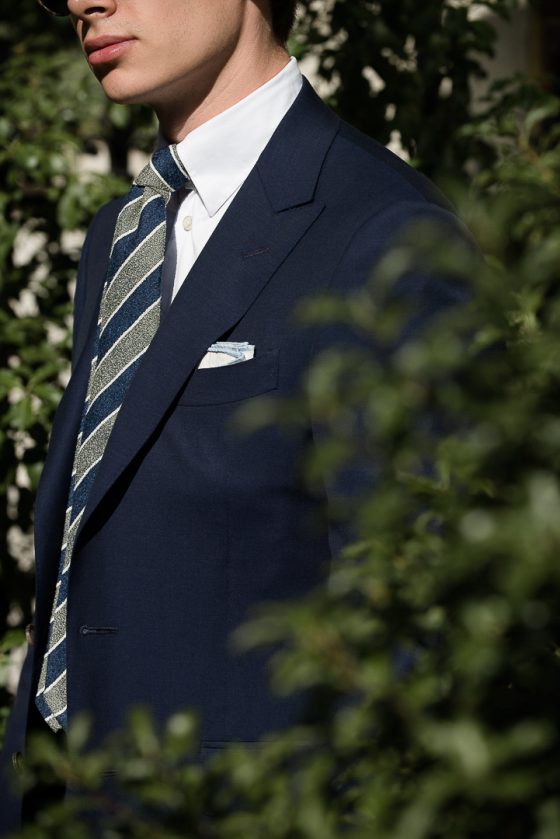 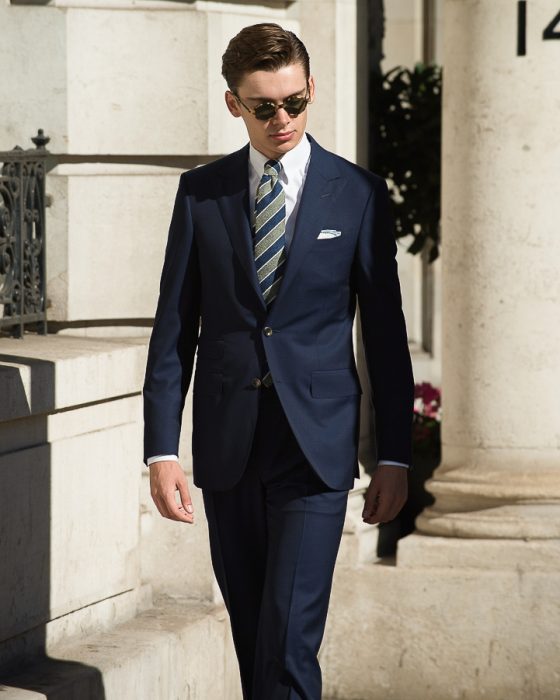 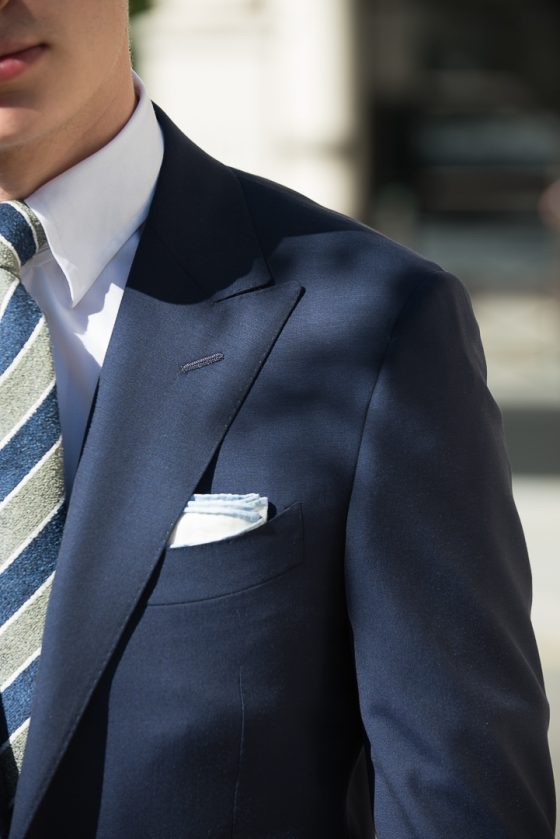 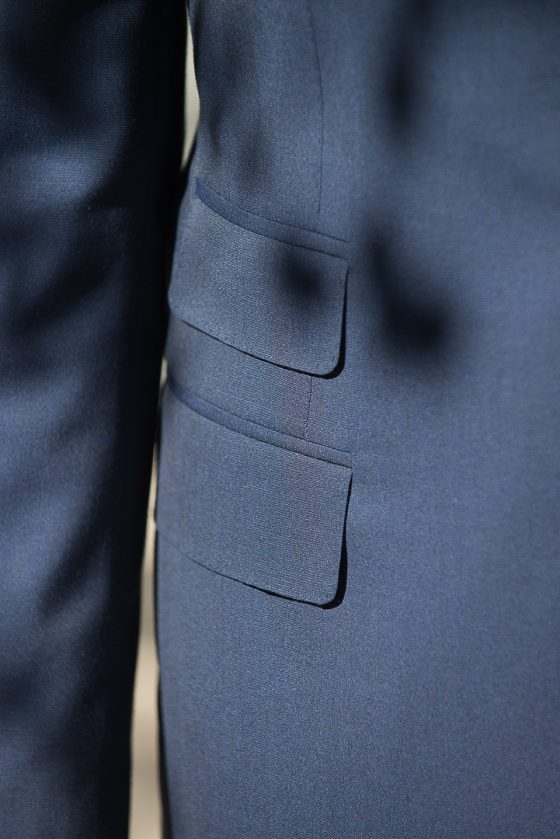 The final result came out very satisfying. We strived to make a classic formal lounge suit the Milanese way (the Canali way). The No.1 suit in a man’s wardrobe should be a classic dark navy suit and this we definitely achieved. I  am particularly happy with all the visible design attributes of the suit. Due to the plain nature of the fabric we added quite a few details to make sure if still felt exciting and distinguished, which I think really worked out well. The structured shoulder together with the peak lapel giving the suit a powerful silhouette. The ticket pocket disrupting the otherwise completely symmetrical design. 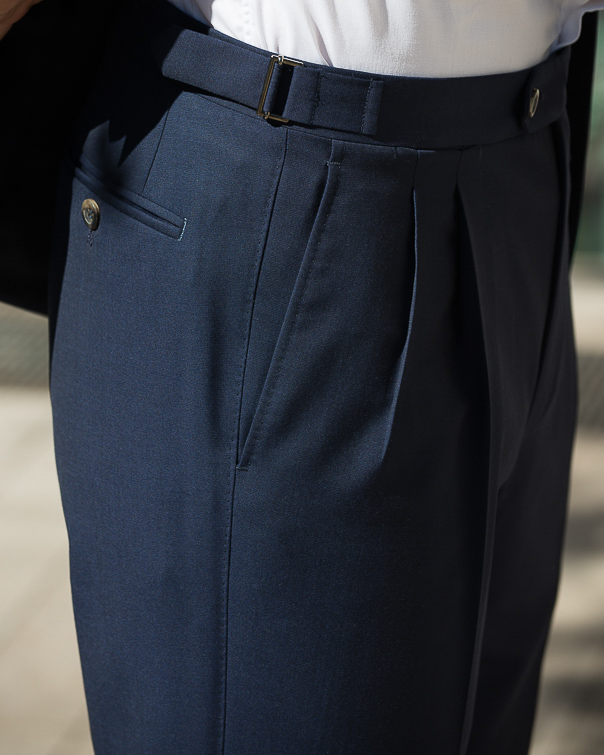 The side adjuster and buttons for braces is eliminating the need of belt loops, which helps enhance the clean look of the waistline of the suit. The trousers was finished with a turn-up to highlight the short but perfect finishing of the trousers.

Overall my interaction with the store Richard Gelding has indeed been happy and pleasant experience, a good start to a happy relation. Their combination of relaxed, yet knowledgeable approach makes shopping easy and enjoyable. 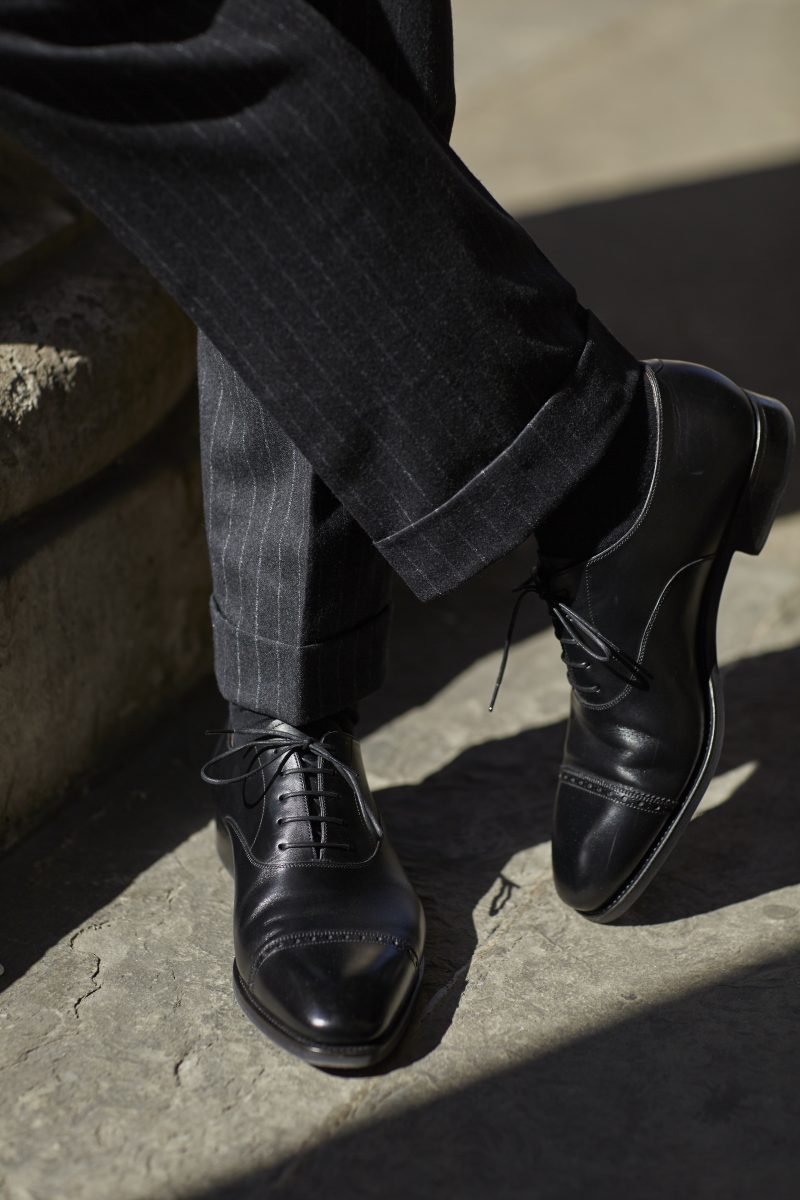 An old saying says “You can tell a gentleman by his shoes” and it has been stuck in my head ever since I first heard it. As much as it might not be right, I feel there is a slight of truth to the words. Having an eye for details such as your shoes, shows a gentleman’s ability to take care of the things he loves. Wearing a well polished pair of shoes can make a great first impression, whether that be professionally or personally. Whilst a sloppy shoe may give the impression that you have come unprepared and do not think highly of yourself nor the person you are meeting.

Two classic pairs of shoes that I have always found essential for any gentleman is a quality pair of Oxfords and an elegant pair of loafers. These two styles will have you covered for practically all smart-casual occasions as well as professional dress codes.

The Oxford shoe
The Oxford, is a simple pair of shoes which is mostly considered as a formal style choice. It is named after the University of Oxford and characterised by it’s shoelace eyelets that are attached under the vamp, a feature termed “closed lacing”. 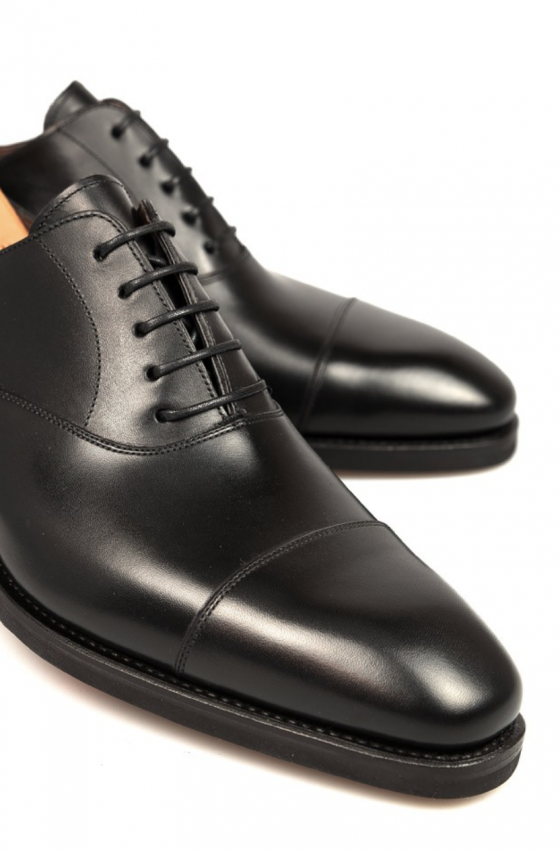 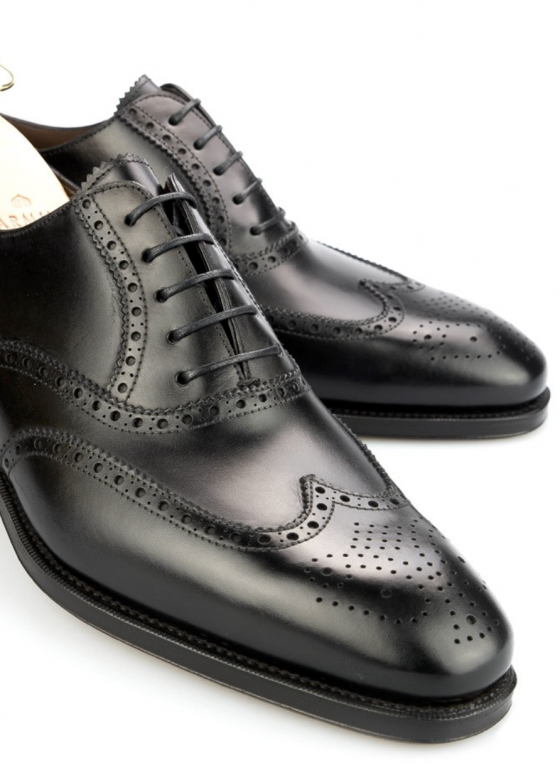 The Loafer
The Loafer, also called “the slip-on”, is the epitome of “the lazy shoe”. Having no laces, there is no need to bend over or to use a shoe horn to put one the shoe, before walking out of the door in the morning. There are numerous different types of loafers. My two personal favourites are The Penny Loafer and The Tassel Loafer.

The Penny Loafer, as we know it today, was first introduced by shoe company G.H.Bass in 1936. Their design included a distinctive strip of leather (the saddle) of the shoe with a diamond-shaped cut-out. Their version of the loafer was named Weejuns (to sound like Norwegians – a nod to the Norwegian roots of the shoe). Weejuns became very popular in America, especially among the students at The Ivy League Collage in the 1950s, who coined the term Penny Loafer. A legend says that, in the 1930s, two pennies were sufficient to make an emergency telephone call. Regardless, the name stuck, and the G.H.Bass penny loafer has achieved the status of a classic.

The Tassel Loafer says to originate from after the end of the World War II. While in Europe, an American actor named Paul Lukas acquired a pair of oxfords with little tassels at the end of the laces. When he returned to America, he took them to several shoemakers and asked them to make something similar. Not satisfied, Paul Lukas kept trying to find a shoemaker that could meet his demand. The request made it’s way to the Alden Shoe Company. The then President of Alden, Arthur Tarlow Sr., Came up with a slip-on pattern keeping the leather lace and tassel as a decoration. The Alden Shoe Co., realizing the potential of the shoe, continued to experiment with the design, finally launching it in 1950. The Tassel Loafer, as it became to be called, was a success, and was especially in popular among bankers and lawyers in the late 90’s/early 00’s. 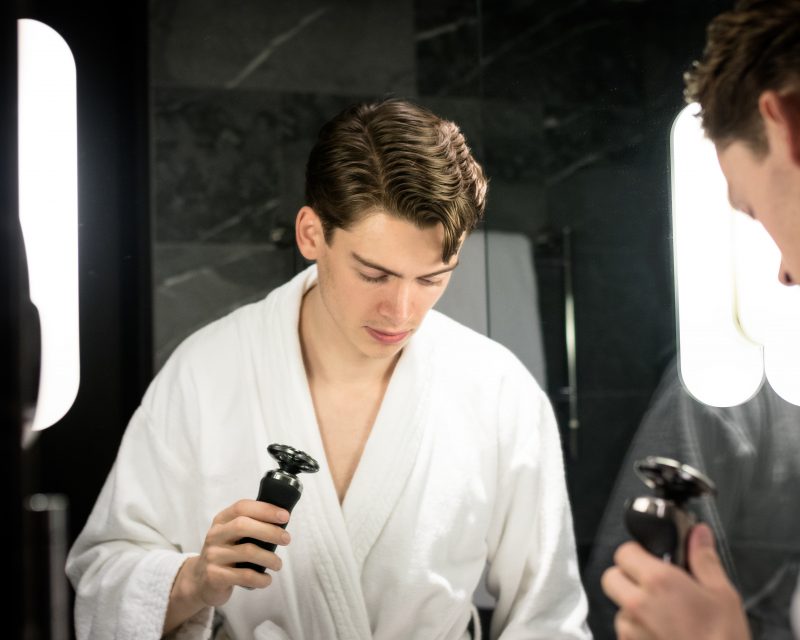 A gentleman is a man who takes care of others and is attentive to his surroundings. But to be able to look outwards and respect others, it is important to take care of yourself first. There should be left no compromise whether it involves your perfectly tailored suit, well polished shoes or neat grooming habits. 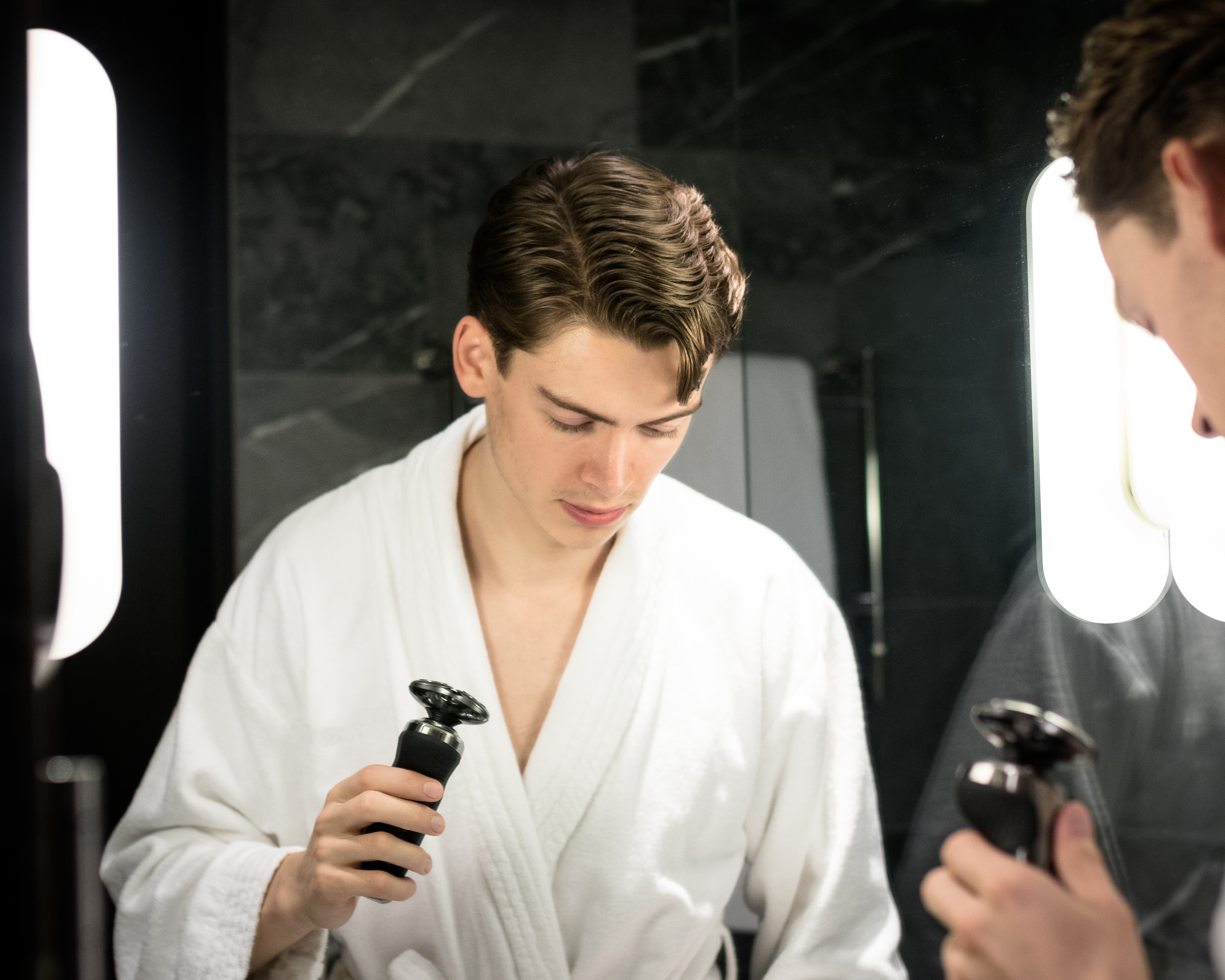 Be a regular at the barber
Too many men wait with cutting their hair until they notice that it is too long. And the reality is that when you notice it, then other people have too. My advice is to book your next appointment while you are at the barber for approximately 4-5 weeks time – in this way your will be proactive and not reactive. Find a barber that you trust and stick to it. It’s almost like going to the tailor, your barber will know your hair and preferences better with time the more you see him.

Tidy up your eyebrows
Big eyebrows are not a bad thing. However, if they are meeting in the middle you have got a slight problem. Always tidy up the space between, above and below the brows for a clean look. If you do not feel comfortable plucking them yourself, your barber will always be able help you out.

Manage your facial hair…Or learn how to shave like an expert
Facial hair of any length needs to be tamed and maintained. I personally prefer the look of a clean shave. However, you might not have time for a long wet-shaving routine every morning, so knowing the basics of a good shave is key.

Since my mid-teen years I have used an electric shaver from Philips that was gifted to me by my father. It always made clean shaving an easy job when rushing out the door on busy London mornings and it always gave me a very satisfying result. This is why I stuck to the brand and tried out a couple of their models as I grew  older. 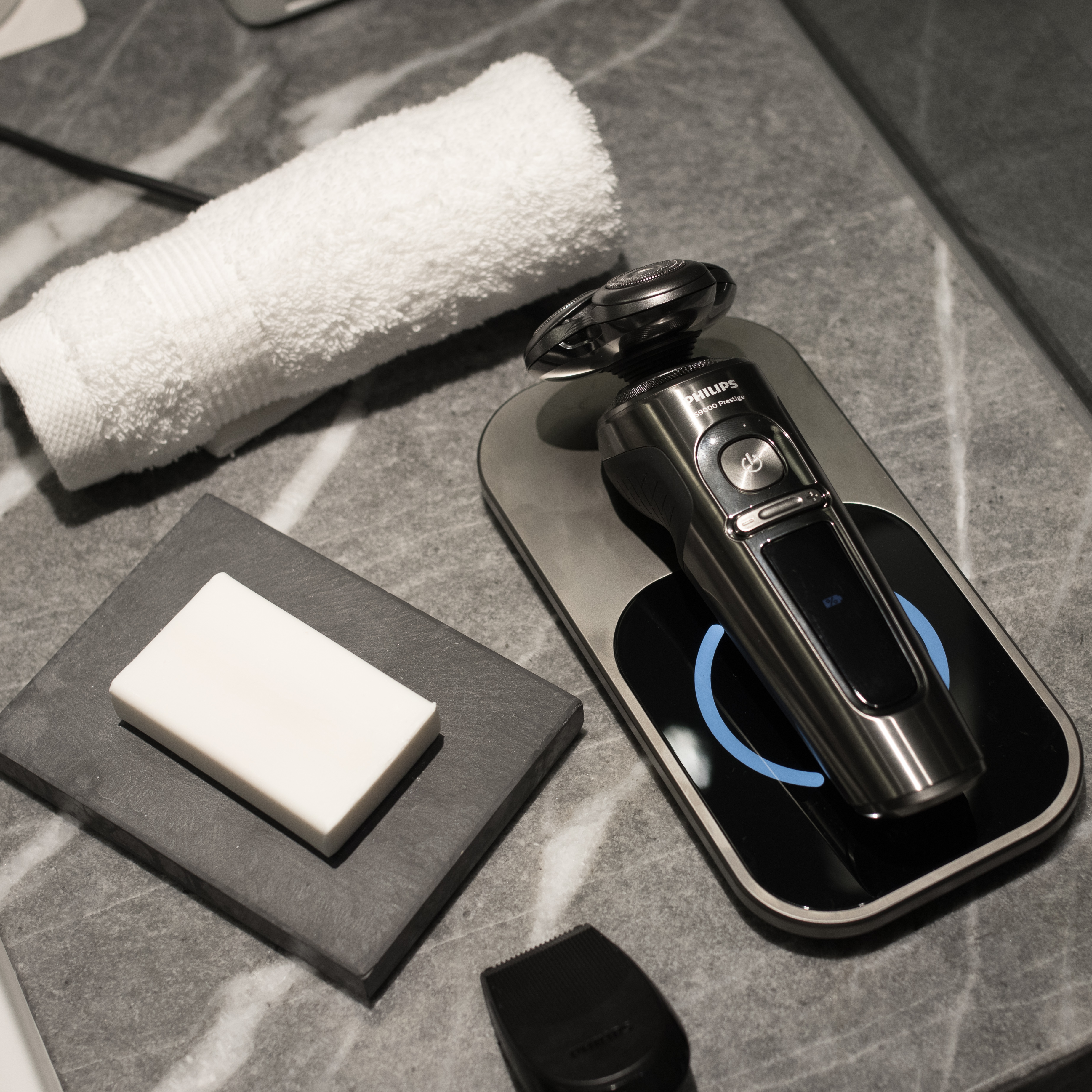 Recently I was given the opportunity to review their new Shaver Series 9000 Prestige electric shaver. A new model focused on delivering the world’s closest electric shave with uncompromised skin comfort (even on a 7-day beard).

Upgrading from less premium models it was interesting to explore the personal comfort settings letting you adjust the shaving speed according to preference and shaving style: sensitive, normal and fast. It offers a blade close shave, whilst being incredibly gentle, making for a very smooth shaving experience. I also enjoyed being able to shave longer stubble that I normally needed to trim An effortless shave is made possible by the multi-direction ContourDetect head that follows every face contour, catching even difficult hairs. The result was a very clean and long-lasting shave. Design-wise the new shaver looks very sleek and elegant too. And a cool feature is the wireless Qi charging pad that fits seamlessly into your everyday routine.

For more information on the Series 9000 Prestige click here.